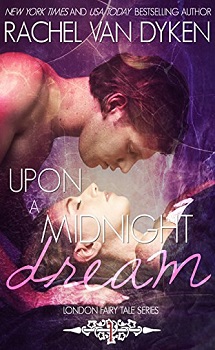 Upon A Midnight Dream by Rachel Van Dyken

“I release you…” were the last words Rosalind remembered before her world went black. Stefan, the future duke of Montmouth, no doubt thought his words were welcomed but he couldn’t have been more wrong. Oh, he was handsome as a pagan Norse god, but that was unimportant when her life as well as those of her family hung in the balance.

With less than six weeks left, Rosalind has stopped believing in the fairy tale, the prince on the white horse, and the stolen kiss that would awaken her from her worst nightmares. Resigned to her fate, she waits for the inevitable curse to run it’s course.

“We must marry at once!” Stefan declared, fully expecting Rosalind to be delighted that he had come to save her, but he was sorely mistaken. Rosalind was no simpering docile female; she was a fiery temptress with a stubborn streak only matched by his horse, Samson. Insulting, infuriating, intoxicating and alluring enough to drive a man mad. Stefan found himself thankful for the curse that required him marry her, thankful for the betrothal contract he had so recently tried to release her from…With the fortitude of a sailor shipwrecked, abandoned, and a solider warring for his life Stefan decides to lay siege to the greatest prize, Rosalind’s heart.