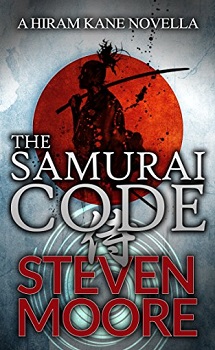 The Samurai Code by Steven Moore

One lethal storm. One deadly criminal. One ancient code. Expedition leader Hiram Kane is in Japan when the storm of the century hits. He joins the rescue mission as flash floods cause chaos, death and destruction.

Yakuza boss Katashi Goto is retiring from the mob. Before he does, there is one more thing to achieve: revenge over a centuries old enemy.

When their two very different worlds collide, Kane is forced to make a choice. He has always known honour is worth fighting for. When challenged by Katashi, he has to decide if it is also worth dying for.