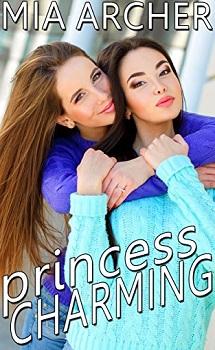 The world thought being a princess was so cool, but Amelia knew the truth: it sucked.One kiss with another girl. One photograph that went viral. One international firestorm of gossip and Amelia finds herself banished halfway around the world to America to cool her heels and wait for the gossip to die down.

A trip to Royal Realms was supposed to be the best part of Dani’s school band career, but she was miserable.

So she realized she was into girls. So she broke up with her longtime boyfriend. He didn’t have to hold a grudge and do everything he could to ruin her trip. Dani was on her perfect vacation and all she wanted to do was escape.

Two girls desperate to break free. Two girls who are about to be thrown together by a chance meeting. Royal Realms is supposed to be the place where dreams come true, and sparks will fly as princess meets band geek in an unexpected romance hot enough to cause an international incident!