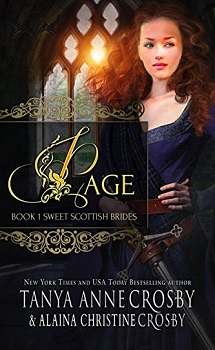 England/Scotland 1124: Page FitzSimon has lived her entire life in the shadow of the man she called father. Left to her own devices, with her mother imprisoned, she still might never have imagined that Hugh FitzSimon would deny his only daughter. Alas, when Scottish Chieftain Iain MacKinnon comes to barter for his son’s release, she learns how expendable she truly is…

Vowing to stop at nothing to secure his young son’s return, Iain MacKinnon captures Page with the intent of bartering her for Malcom’s freedom. Little does he realize that Page’s father doesn’t want his daughter, and although he will win Malcom’s freedom by other means, he will also find himself a reluctant champion to the Sassench lass who now has no home.

For readers who prefer romance without strong language or sex. This is a clean read book.