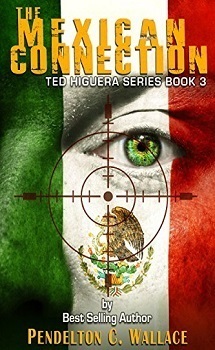 The Mexican Connection by Pendelton Wallace

In The Mexican Connection, the third book in the Ted Higuera series, Ted and Chris are lured to Mexico by an old nemesis. They are dragged into Mexico’s drug wars and have to confront the corruption of Mexico’s law enforcement.

When Ted’s younger brother disappears in Mexico, Ted and Chris charge to the rescue. They meet a colorful cast of characters as they search from border towns to the cosmopolitan Mexico City to ancient Aztec ruins.

Female PI Catrina Flaherty is in Mexico on a mission of her own. She’s hunting for the drug dealing husband of a client who left her holding the bag back in Seattle.

Have Ted and Chris finally met the loves of their lives?