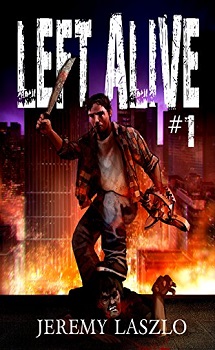 The world is dead. Plants gone. Animals gone. The air is thick with dust and ash. Water has turned to murky cesspools of death and decay. Life and Earth as we know it are gone – at least all the good parts.

It’s been almost a year since the first signs that we killed our planet began to arise. Order and humanity are gone now, replaced by vigilante justice and survival at all costs. Nine months have passed since the quarantines were put in place. Six months since we realized it was too late, and just after that the governments of the world fell.

That was nearly seven billion people ago, and now Charles has decided it is time to pack up and leave in search of the one thing still worth living for – his daughters.

With rumors of roving bands of cannibals, and even zombies, he knows making the journey is a long shot, but he has to try. He promised their dying mother that he would keep them safe and has every intention of doing just that, come hell or hungry zombies.

In a soulless world filled with nothing but pain and death, will his determination be enough to see him through to the end?