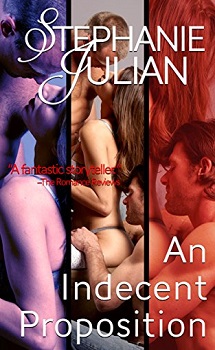 An Indecent Proposition by Stephanie Julian

One night. That’s all Erik and Keegan want with Julianne. And they’ve come up with the perfect plan: Offer Julianne a half-million dollars. Julianne is in debt up to her eyeballs due to her mother’s illness. Five-hundred-thousand dollars would pay off her bills and give her a start on a new life. All she needs to do is have sex with a man she’s never met.

An explosion left Erik with scars, physical and psychological. Work is his only refuge. Until he sees Julianne through a surveillance camera. And he discovers a desire he thought had been burned out of him.

Keegan has watched his best friend retreat from the world for too long. If his desire for Julianne brings him back to life, Keegan will bring her to him, whatever it takes.

Julianne is young, adventurous and not afraid to take what she wants. And she wants these men. But what happens when the night is over? Well, that’s the best part of the story…