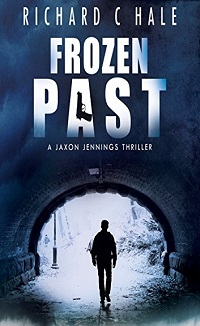 Frozen Past by Richard C Hale

Jaxon Jennings. Cop. Homicide detective. Partner. He always had your back and rarely made mistakes.Until the death of his son. Until the night he couldn’t save him. Until everything he held dear was taken away from him.

Now, a shell of a man, his reckless actions mark him as a burn-out. A Loner. A dangerous man whom many in the Fairfax County Police Department cannot trust. The criminals he pursues in the suburbs of Washington D. C. are nothing more than ways to bide his time until his next drink, next fix, next loss of control. His past haunts him no matter how hard he tries to hide from it.

So, when a boy’s body shows up floating under the ice of a quiet neighborhood pool, Jaxon finds himself immersed in a world where the ghosts of his past feel too close for comfort. A psychopath is using the innocent in ways that appear familiar.

Jaxon’s past is catching up with him. And the anger that seethes below the surface threatens to destroy not only his life, but the lives of a group of kids somehow connected with him. The answers are locked, frozen in the part of his past he refuses to confront. But people are counting on him. And he must do anything to save them.

Anything. Even if it costs him his life.