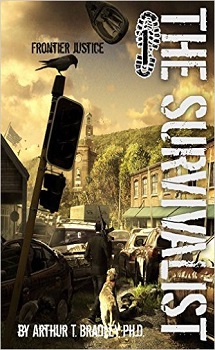 The Superpox-99 virus has wiped out nearly the entire human race. Governments have collapsed. Cities have become graveyards filled with unspeakable horror. People have resorted to scavenging from the dead, or taking from the living. The entire industrialized world has become a wasteland of abandoned cars, decaying bodies, and feral animals.

To stay alive, U.S. Deputy Marshal Mason Raines must forage for food, water, and gasoline while outgunning those who seek to take advantage of the apocalyptic anarchy. Together with his giant Irish wolfhound, Bowie, he aligns with survivors of the town of Boone in a life and death struggle against a gang of violent criminals.

With each deadly encounter, Mason is forced to accept his place as one of the nation’s few remaining lawmen. In a world now populated by escaped convicts, paranoid mutants, and government hit squads, his only hope to save the townspeople is to enforce his own brand of frontier justice.