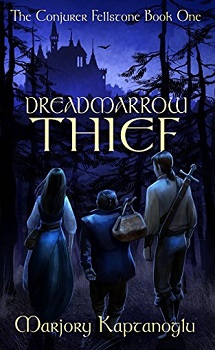 Sixteen-year-old Tessa Skye, a locksmith’s apprentice, loves to shapeshift into a sparrow using a windrider – a forbidden magical amulet.

During one of her outings, she accidentally reveals herself to the Conjurer Lord Fellstone, who reigns over Sorrenwood with an army of boar-headed men, and corpses he calls up from the dead. The tyrant sends his knights after Tessa, resulting in the death of her Papa.

To save him, she sets out for the castle to steal Fellstone’s Dreadmarrow, his most prized magical artifact, which has the power to restore life. She’s joined by the fortune-teller Calder, searching for his lost love, and Ash, the gravedigger’s son, whose growing attraction to Tessa distracts from his plan to avenge his murdered twin. Dreadmarrow Thief is a universal coming-of-age story about a girl who seeks to wield great power, only to learn it comes at a terrible price.