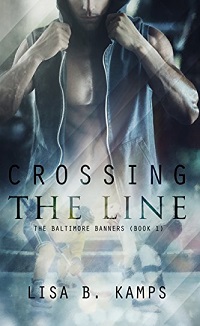 Crossing The Line by Lisa B. Kamps

Amber “AJ” Johnson is a freelance writer who has one chance of winning her dream-job as a full-time staffer: capture an interview with the very private goalie of Baltimore’s hockey team, Alec Kolchak. But he’s the one man who tries her patience, even as he brings to life a quiet passion she doesn’t want to admit exists.

Alec has no desire to be interviewed–he never has, never will. But he finds himself a reluctant admirer of AJ’s determination to get what she wants…and he certainly never counted on his attraction to her. In a fit of frustration, he accepts AJ’s bet: if she can score just one goal on him in a practice shoot-out, he would not only agree to the interview, he would let her have full access to him for a month, 24/7.