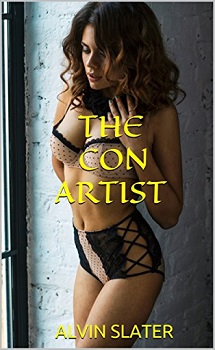 The Con Artist by Alvin Slater

Claudia Stephani was the brunette beauty from France who knew that she what she was doing was wrong. The art of the con was trying to somehow make it work out right.

She was what was known as a natural. Her sexy skills had been nurtured and she was too good at being bad for her own good. Javier Antonelli had taught her too well, and he wasn’t done with her by a long shot. Her sexual exploits were all about letting them see her and making them want her, and then getting it from them.

When Claudia took the identity of heiress Jasmine Rosen to work out her next sexual set-up, the walls started coming down. Their target was banker Jonathan Clark. They did the work and went undercover to get the womanizer where they wanted him.

What Claudia quickly learned from Jonathan Clark was that not only was he hard to handle, but that the games that he could play sent her places that she had never been. All she could do was try to hold on by letting herself go. She was supposed to be the sexual money honey. He was the banker that liked to make direct deposits with her. In the war between the sexes beauty was in the eye of the beholder.

The fortunes of war were all about players only loving you when you were playing. Claudia liked being Jasmine Rosen. Jonathan Clark had her wondering which one of them was the bigger and better con artist. He was supposed to be the target, but the target was on her own back. That was right where he wanted her, but they both wanted more from each other. Giving and getting turned into who was taking the other for a ride. It was all about what was called “playing the long con.”