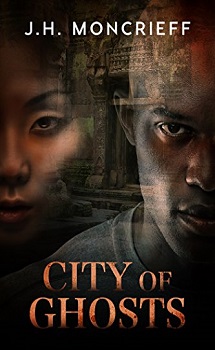 City Of Ghosts by J.H. Moncrieff

On the day the villagers were forced to flee Hensu, not everyone got out alive. Jackson Stone is touring the abandoned Chinese city when he slips away from the group to spend the night, determined to publish an account of his ghostly experiences there.

Then he meets Yuèhai, a strange, soft-spoken woman who can tell him the city’s secrets—secrets the Chinese government would kill to keep hidden.

As Jackson uncovers the truth about Yuèhai and the ghost city, he’s drawn into a web of conspiracy, betrayal, and murder. He must risk everything to save himself and bring honor back to Yuèhai and her family.