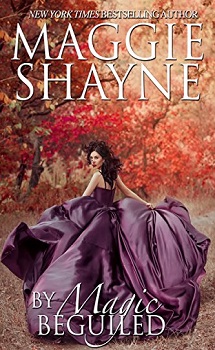 By Magic Beguiled by Maggie Shayne

As a child Adam found respite from his father’s cruelty in the woods around their home. During one of his forest adventures, he crawled through tunnel and emerged into another world, a magical world, where a beautiful fairy child splashes in an enchanted pool.

It was just imagination… Or so Adam tells himself as an adult. Until he finds a painting of that same crystal-strewn glade, that same glistening pool, the same mysterious girl splashing in its waters. That painting becomes his most cherished possession.

Fans of films like The Huntsman will devour this series.