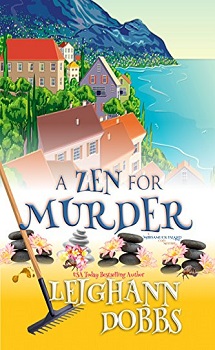 A Zen For Murder by Leighann Dobbs

Tourist season is about to start, and murder is the last thing on the minds of the locals in Mooseamuck Island, Maine… but that’s about to change

When local psychic Zoila Rivers is found dead at the zen garden, retired police consultants Dominic Benedetti and Claire Watkins are forced to team up to catch the killer. Too bad Claire and Dom don’t always see eye to eye.

But with an island full of locals who all have secrets, Claire and Dom have to put aside their differences in order to solve the case before the police arrest the wrong person and a killer goes free.

Will Claire and Dom figure out whose secret was worth killing for in time to stop the killer from claiming another victim?