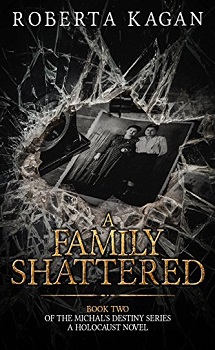 A Family Shattered by Roberta Kagan

It is Kristalnacht. the night of the broken glass. The Margolis’s, a Jewish family, have been living peacefully in a small area of Berlin. But, tonight, everything will change forever. The Nazi’s have in motion a reign of terror that will ultimately escalate to an attempt to annihilate all of the Jewish people.

Taavi Margolis is arrested on Kristallnacht when he races out of his apartment to protect his daughter’s fiancée, Benny, who is being attacked and killed by a gang of Nazi thugs as they pillage and destroy the streets of a little Jewish neighborhood in Berlin.

Taavi’s wife, Michal and their two daughters stare in horror through the window as Benny is savagely murdered. Then, they watch helplessly as the gang turns their attention to Taavi. They beat him with clubs until he is on his knees and bleeding on the pavement. When the police arrive, instead of arresting the perpetrators, they force Taavi into the back of a black automobile and take him away. Michal, pulls her daughters close to her. No one speaks but all three of them have the same unspoken questions.

Will they ever see their beloved husband and Papa again? They realize, after tonight, the Anti-Semitism that is growing like a cancer all around them can no longer be ignored. Their future is uncertain. What will become of this family, what will become of the Jews? This is the story of the struggle of one Jewish family, to survive against the unfathomable threat of the Third Reich.